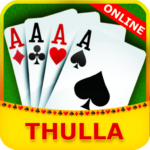 Bhabhi Thulla Hearts Online demands player’s proper atttention and present mindedness.
in this game player has to remember the card suits played in each turn and the thullas if given to some player.

Commonly played in Pakistan,India,Bangladesh,England and United States of America.

The major aim to GET AWAY by playing all cards. And the Looser will be the one who will fail to get away his/her cards and remain holding cards.
In Pakistan,India and Bangladesh game used to call as BHABHI. While in European or rest of the world game is known as GET AWAY.

Hearts Ace Bhabhi Thulla is a complete game it will surely make you addictive because of its huge amount of challenges.

Winning Rule:
The one who GET AWAY from all his cards will be the winner. And the one who will fail to get away from others will be a looser and commonly known as “BHABHI”