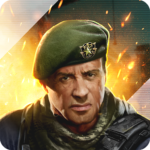 The world has collapsed under the tank treads of the Iron Order. As a Commander in the Resistance, you are Earth’s last hope in one of the largest 3D MMO worlds on mobile.

Featuring SYLVESTER STALLONE as the voice of Jasper Reese – your story guide and most powerful ally in BATTLE STRIKE FORCE, an epic 3D RPG multiplayer experience. Follow his instructions to victory and immerse yourself in addicting gameplay!

Now, get out there and lead the Resistance to victory!