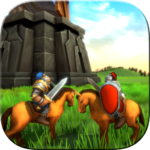 Start your own war in the most real and accurate Battle Simulator! Create your strategy and become Master of War! Prove yourself in battle Strategy Games with different tactics! Warriors, mages, wizards, archers and cavalry awaits you to unlock then and use it in Epic Warfare!

Battle Simulator is RTS Game that allow you to use your strategy skills and become Battleground Master! You can play against our levels and become Army General or with your friends in Custom sandbox battle mode! You can also test units in Custom Mode and see how they behave versus different units!