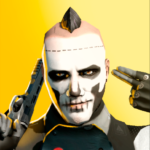 What can be better than the classical realistic first person shooter? The one shooter which comes with a mix of your favorite FPS features and brand new ones!
Meet new mobile shooter with a capital S – Battle Forces!

Battle Forces is not just a simple realistic shooter or a typical shooting games online . Unique cyberpunk set will impress all fans of FPS genre!

Battle online against players worldwide! Choose the operative, arm and get a gun, attack!

– 6 heroes with extraordinary abilities!
– Special abilities! Each character can use unique ability to destroy or to heal…to WIN !
– Each hero has a story. Our battlers are not simple combat troops typical for shooting games online and FPS! They are charismatic persons with their own stories of life!
– Upgrade the account to improve your operatives and make them extremely powerful shooters!

– huge arsenal! Pistols, machine guns, rifles, grenades. All of the best guns beloved by the fan of shooters!
– Modify weapons! Improve your firepower with dozens of additional Silencer, sights, flash hiders & laser designators! All you need for shooters and online games!
– Skins for guns! Make your gun bright and strong!