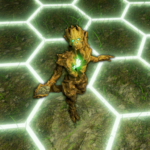 ★ Get Idle Reward.
You get the reward even when you are not playing spend it wise to improve your heroes and spells.

★ Upgrade And Evolve Your Heroes
Collect enough resources and make your heroes stronger. Make the best of heroes synergy in exciting turn-based battles.

★ Fight against other players.
Create an undefeatable army of epic heroes and become the top 1 in the Arena of Dumuk-Adakh. Do not forget to assign loyal heroes to defend your reign.

★ Get most of heroes synergy.
Combine different powerful heroes in your army to get most of their abilities and skills. Master your turn-based tactics with right heroes and matching skills.

★ Use magic skills and scrolls.
Use deadly magic spells and skills to crush your enemy.

★ Do not forget about rpg aspects of the Azedeem.
Spend points to upgrade your main hero’s skill tree which differs depending on selected class (warrior, mage or priest).

★ Lots of different game modes.
Take time to complete quests in “Happy Duck” Tavern or follow the campaign in Adventures, fight in Arena and Trial Of Luck or tear through levels of Misterious Eternity. And do not forget about Dungeons as it keeps the best reward!

★ Collect legendary heroes and learn their story.
Collect all of unique and epic heroes to build up a trully mighty army. Use them in battle depending on their classes and roles. Warriors, healed by priests and supported by mages protect your army, while assasins and archers do lots of damage.

Make your turn to save Azedeem!