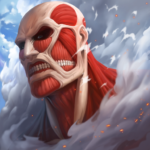 Attack on Titan: Assault is a 3D turn-based RPG with action elements licensed by Kodansha and created by GameSamba. Immerse yourself in the desperate, distressing and thrilling atmosphere of Attack on Titan as you experience key events from the anime firsthand.

Build your own team of Titan slayers by collecting and training characters from the Attack on Titan anime. Join up with other players to take down Titans or test your squad’s strength in PvP competition!

— Parkour Gameplay featuring ODM Gear!
Explore the world of Attack on Titan by utilizing the Omni Directional Mobility gear. Fly through the air, and parkour across rooftops as you fight against the Titan threat.

— Immersive Environments, Signature sounds
Visit locations pulled directly from the anime as you battle across Shiganshina, Trost, Calaneth, the Forest of Giant Trees and other exciting environments. Relive the story with authentic voice lines and video segments from the English version of the anime!

— Choose Your Favorite Character!
Recruit original characters such as Eren Jeager and Mikasa Ackermann from the anime to fight for your squad. Choose from dozens of hero cards to build you Titan fighting team!

— Multi-Dimensional Character Growth System!
With multiple ways to boost your power in the game, including card collection, upgrades, and equipment and formation combinations, you can build your own unique lineup!

— Play Alone or With Your Friends!
In addition to the traditional single-player game modes, there are also difficult battles that will require the cooperation of a group of players to complete. Players who prefer PvP battles can show off their abilities in the arena and squadron battles! Join your friends and fight to your heart’s content!

The game may crush, flash back or laggy a lot if your Android Device can not reach the minimum requirement. Please contact our live support with your device details if you encounter any above problems, we check ASAP. Thanks for your understanding.
1. Optimized game performance for low-configuration devices
2. Optimized the low and medium graphics display
3. Optimized the newbie guidance.
4. Optimized in-game activities.
5. Added 3 SSR titans.
6. Added new squadron dungeon and event dungeons.
7. Adjusted the difficulty of normal and elite stages.
8. Adjusted the gameplay of survival trial.
9. Fixed some bugs and display errors.