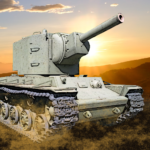 A Lost hardcore experience is realized here!
Why don’t you experience a genuine battle?
The total number of downloads has reached 500,000!

Become a member of a tank platoon, and let’s challenge various missions!
A fierce tank battle occurs in a real battlefield!
To win the battle, collaboration with friendly units is important.
With clever tactics, you can also overcome powerful enemy troops!
Can you become a hero by surviving this severe battlefield?
Now you can download and play for free!

Features:
– It is possible to play with online multiplayer (PvP match) against players all over the world.
– Realistic tank fight 3D action & simulator tank game.
– Player can move in very large “Open World” field.
– US and Japan warships support ground battle in the field of remote islands!
– Various missions such as reconnaissance, ambush, raids, blitz fight exist.
– Player can experience a feeling of the battlefield by real effect and sound, it’s not just panzer games.
– Realistic damage system by physical calculation is adopted.
– A.I tank units have precise movement and sophisticated tactics.
– It is possible to change the situation by requesting an air attack.
– A powerful air fight by famous fighter aircrafts is reproduced.
– It is possible to use a coaxial machine gun as spotting rifle.
– A tank can be steered with a simple touch operation.
– The viewpoint can be switched between first person (FPS) and third person (TPS).
– Because tanks at the time of World War II (WW2) are faithfully reproduced, it is recommended for those who like classic tank games.
– Famous tanks of major countries appear one after another (eg Soviet Union, Germany, the United States of America, the Empire of Japan)

How to play:
– Please click a help button of the start screen and confirm the basic operation.
– Playable tanks increase by achieving missions.
– Each mission’s command is displayed in the message box at the top of the screen.
– Playable tanks in online is unlocked depending on the progress of the campaign.

FAQ:
Q. How to get coins in the game?
A. Gold coins can be obtained by in-app purchase. Silver coins can be obtained by watching reward ads.
Q. How do I unlock locked tanks?
A. Free tanks are unlocked by advancing missions. Charged tanks can be purchased using gold coins.
Q. Can I manipulate fighters and warships on your own?
A. Currently, units other than tanks are only operated by A.I.

Caution:
– This app requires Internet connection.
– If you change a terminal or uninstall the game or clear data, data of coins and items that you have purchased will be lost.
– Depending on the terminal, it may take a little time to load the data at the time of initial startup.
– When a notice of other app occurs, the sound of the game may stop. In that case, please re-launch the app.