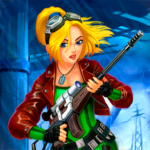 Jump into a classical action game world, where the evil don’t sleep and heroes are invincible and awesome. Endless epic battles for the world peace in Army Heroes in your mobile phone! Compete for victory in the battle world, summon champions to your team!

Unite with the league of hunters in the dungeon world of future. Choose your character, your can play as bishie hero, or change one to another and level-up his stats. Defeat your enemies. Be a guardian of peach and made this shadow world as it was before the catastrophe.

– Customize your team of champions;
– defeat the enemies and bosses, gain piles of crystals;
– embark on an epic adventure
– collect and level-up your heroes! Restore the former glory of the ARMY-H and search for the leader of Unknown;
– discover the new abilities and apply it in the battlefield;
– clash with enemies;
– lead the rating list and compete with friends;
– build and develop your own squad!

In 2020, a powerful electromagnetic charge left the entire Earth without electricity for three days. For such a short period, the planet plunged into chaos. The Unknown Organization has taken credit for the incident. Separately, the countries happened to be powerless against the Unknown threat. The decision was to create a squad of ARMY-H, whose soldiers did not conform to any government and were not bound by any law, except the great law of war. Their ultimate mission was to destroy the Unknown.

The ultimate survival contest in rpg mode is waiting for you! Start this top strategy game and achieve the highest rating in a mobile adventure!
We guarantee you an addicting gameplay with lots of thrilling missions and easy and intuitive controls that let you fully enjoy the game.