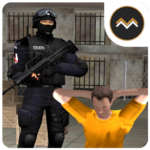 It’s time to get in to action packed anti escaping prison games. Your duty is to guard the jail breakout and keep an eye on all activities in the jail premises and in prisoner’s cells.

Head of Mad City Crime Mafia is recently been detained and is been shifted to your jail – hard time because no one has ever prison escaped mission from this jail due to strict surveillance and hi-tech lockers having motion sensors, electric locks, electric barred window and 24×7 CCTV surveillance with assistance of trained agent survival squad in this prison games.

Members of hard time mafia group, is attacking the jail prisoner for a break out mission for their boss and jail criminals, which you will have to stop. In this Prisoner simulator game, your sole duty is to respond to outer and inner threat lockdown. Because other jail criminals prisoners also get this opportunity to get a way out illegally while the jail guards are busy in making Prison escape mission of Crime Mafia Boss, a failure lockdown.
For gangster war, it’s a agent survival prison escape mission. They will go to any limit to make this mission a success while you, being the in charge of the Jail breakout, “Alcatraz Prison station” has to watch other gangsters war too and to stop this Mafia gang leader to break out from the prison. In this break out 3d game, no mercy – is the rule.

Like other police games, it also has a team of K 9 dogs, the head sniffer dog, named Maggie is your key guard dog to stop gangster killer to enter the facility. Once, the gangster killer war gets success in no escape in 3d breakout game, the level will be failed due to nonperformance of your duty efficiently.

You can call the duty officer and ask for a backup, but respond time of a backup SWAT shooter team is minimum 10 mins – you need to engage the enemies and other gangsters killer with the help of mission prison escape guards present on duty along with you till you get a backup support.
Added German shepherd dog
Improve controls
Introduce in-app purchases
Levels Increase