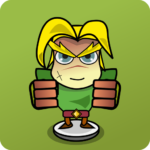 Another Quest is a simple and free roguelike made for portrait mode!

? Infinite replayability
– Play with different heroes
– Discover more than 70 items
– Random levels. Have a new experience every times.
– Cast spells and fight against several enemies and bosses
– Fight with a broken sword or an incredibly powerful weapon!

No two runs are the same.

? Classical roguelike gameplay
Another Quest simplifies the genre but keeps some essential ingredients like procedural generation, turn-based and grid-based gameplay and permadeath.

? Simple controls and interface
You can play with one-hand! Perfect roguelike for quick games on the subway, train, or bus.

Can you defeat all bosses on the top shelf?

If you experience any problem with Another Quest or have suggestions, please contact me at pelicapp@gmail.com.

Supported languages: English, French
– Added some explanation
– Fix a bug where some NPCs sometimes did not have a base
– Signs with a skull can no longer appear on the same line as the hero during a change of stage
– Fix a bug that could make the game crash when a rat or a bat was attacking