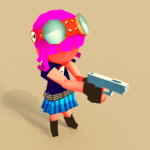 Anikila vs Alien Pumkins has a fast-paced combat system. The character has 3 weapons (Pistol, Tactical Shotgun, Sawed-off shotgun).
You can get the ammo and extra life, looking in the city or destroying enemies.
Performance improvements