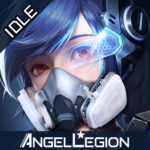 [Game Info]
Miya, a mysterious girl, what’s her big secret? All the forces of Sheila Galaxy fight against each other for it? Will the ancient prediction come true?
As a junior star hunter, how would you lead your battle angels and Miya to get through the difficulties?
Go through everything with Miya! What kind of relationship will you build? Friendship, Kinship or Love…
The story still goes on, and you are the hero!

[Idle System]
Dispatch your angel legion before you leave the phone alone, they will automatically fight for you!
You will become stronger when you come back!
Nearly a hundred angels will follow you!
Even if you are offline, you can get abundant gene rewards!

[Appearance & Outfit]
Elaborate Appearance: Design your angels’ appearance as you like
Shared Outfit: When you own a single outfit, all the angels can wear it!

[Strategy]
Angels have all their own unique skills and talents!
Abundant commander items and strong eudemons!
Combine them rationally to become the strongest universe hunter!

[Strategy]
Angels have all their own unique skills and talents!
Abundant commander items and strong eudemons!
Combine them rationally to become the strongest universe hunter!

[Endless Test]
Ceaseless powerful enemies, extremely urgent dangers
You need to give full play of your intelligence to break through the difficulties and get abundant

[Boss Raid]
A young girl from the ancient Protoss has three different combat forms.
For honor and your own legend, go to defeat her!
1.Functional Adjustment
2.Added Elf system
3.Added Military Match
4.Commanders can pick up Space Capsule in adventure now, which is a way to interact with other players
5.Optimized the gameplay of Endless Trial
6. Canceled the entry of Pray System(Moved to the lineup interface)
7. Increased Legion Contributions generated by players using Adv. Worship and Devout Worship
8. Added achievements about equipment
9. Some Commander Item values have been adjusted

Syrup and the Ultimate Sweet 2.1