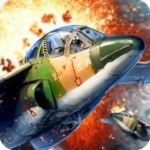 To anyone is a fan of Sky shooting games and like to simulate sky fire shooting, Aerial Fight: Century War is meant for you!!

Aerial Fight: Century War will take you to the world of military aeronautics. In game you will be the commander and lead your troop to conduct an air war against huge enemies in the sky. You will be armed variety of weapons to fight in any situation.

If you need an additional adrenaline rush, you can go on a mission by yourself and rule the sky. Not only you could show your clever fighting way to your enemy but also you got varied weapons to fight in any situation. No matter in long distance fight or in face to face fight,you would have the right weapon to kill your enemy.

In case if you have anything wonder that needed to be addressed just send us an email to this address:
We will take a look at it and reply to your email as soon as possible.