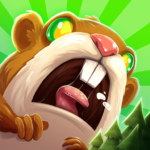 Welcome to the apocalypse! Assemble your hero squad and cross post-apocalyptic terrains to destroy invaders in this fast-paced action game to take back the planet! Use giant Guardian monsters on the offensive to defeat aliens, zombies, and other mutants and defend your town! Increase your action squad’s strength to rule over rival survivors in PvP Raids, Night Ops missions, and more!

UNLEASH GIANT MONSTER GUARDIANS
● Bring a giant fire-breathing lizard, killer robot, or an unstoppable mutant hamster with laser beams that shoot out of its eyes to battle!
● Defend your town from invaders with giant guardian monsters!

BUILD AND DEFEND YOUR TOWN
● Strategically build your town with unique rooms and level them to increase their power limit
● Defend your town with laser blasting machines, powerful buildings like the Clown House that spawns killer clowns, and many more defensive structures!
● Level your buildings to improve defenses against invaders, so they don’t steal your resources

EXPLORE ALL GAME MODES INCLUDING PVP
● Campaigns – Take your action squad on story-driven adventures across the map to collect heroes and gather resources
● PvP Raids – Raid other players’ towns for epic rewards and race to the top of your league’s leaderboard
● Night Ops – Sneak your heroes into enemies’ towns without getting caught for great rewards!
● Away Missions – Send heroes on missions for resources and XP while you’re away

Action Heroes: Apocalypse is completely free to install and play; however, some game items can be purchased for real money.

SUPPORT
If you need help with your heroes, please contact our support team at actionsquadgame@kingsisle.com.