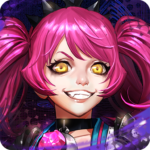 3. 2 Characters tag action
When you are in an emergency, call your comrades and fight together! A fellow character enters releasing a powerful attack. The rest of the characters automatically deal with enemies! Together, I’m not afraid of the boss monster!

5. Go strong with less effort than idle game
Raise the level of aggression, defense, and HP to strength the character. Easy growth that does not need to be raised by character!

6. Endless Stages
The stage is endless! The more stages you go through, the more powerful the monster. Complete with users around the world!
* Added lobby
* Added item system
* Added postal system
* Sound and Bug Fixes