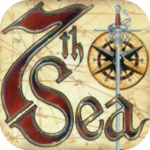 Fight for what’s right—as an up and coming pirate! Battle slavers, sea monsters, and your own corrupt government to become a hero of the high seas. But will you betray your own crew for wealth and power?

“7th Sea: A Pirate’s Pact” is a 200,000-word interactive adventure novel by Danielle Lauzon, set in the world of the table-top role playing game 7th Sea. It’s entirely text-based, without graphics or sound effects, and fueled by the vast, unstoppable power of your imagination.

Looking for adventure at sea? You’ll get more than you bargained for when you end up joining a pirate crew. These pirates are known among sailors for having their own moral code, one that is now yours. You’ll have the chance to rescue prisoners, uncover a secret plot, and even build a navy to liberate an island fort full of slaves.

But you’ll also be tempted to break your pirate bonds to seek your own gain. Would you still free the slaves if you could take out your own rivals instead? How far will you go to save your friends? And when you uncover corruption in your homeland, will you choose villainy or vengeance?

Earn your crew’s loyalty and they might make you their captain, but get careless and you might have to walk the plank!

• Play as male, female, or non-binary; gay, straight, bi, asexual, or poly.
• Choose from three different nations as your homeland, with distinct stories for each.
• Romance other pirate captains, or compete with them as your rivals.
• Fight for good, or work for evil.
• Lead a rescue, uncover a secret plot, and defeat tyranny.
• Visit various island nations to win them to your side and build a navy.

If it’s the pirate’s life for you, what will you sacrifice for freedom?
We regularly update our games to fix minor mistakes, or make small adjustments to improve our games. If you have an error to report, please email our support address. If you enjoy playing our games, please leave a written review. It really helps!

Plus de Choice of Games LLC