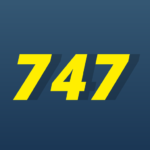 747 is a fast-paced skill based game, in which players solve simple math puzzles. The player with greater accuracy and speed wins the game. In case of a tie, where both players have answered at the exact same time, or if both have answered incorrectly, the application will pick a random winner. This is a two-player game, and players are matched randomly by the app. If no players are available at a given time, the status of the game remains pending. As soon as a player gets matched to a pending game, the user is notified of the game results.

You can play as long as you want and the app is completely advertisement free.

Game Highlights:
– It’s free app. You could compete with others using the FREE chip as often as you wish.
– You play with a real person. Each game is played between two players, you and an opponent.
– It is a fast game. Each game is 7 seconds and the results are out right away.
– Detailed statistics to understand how you are performing against others on time.

Ready to take on others on a Math challenge? Download 747 NOW!
1. Redesigned the Menu
2. Enabling discard choice
3. Design and Bug fixes