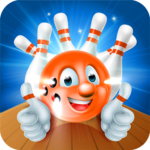 Play the best free 3D bowling Pro game in amazing realistic 3D graphics.
Great for kids and adults!
Bowl with a friend or against your smartphone – gratis.

How to Play:
1. Drag the ball to the right or left to position the ball for your free throw
2. Flick the ball with your finger to bowl
3. Move your phone left and right to change the direction of the ball.

A game is made up of 10 frames. Each frame represents one turn for the bowler, and in each turn the player is allowed to roll the ball twice. If the player knocks down all the pins with the first roll, it is a strike; if not, a second roll at the pins still standing is attempted. If all the pins are knocked down with two balls, it is a spare; if any pins are left standing, it is an “open frame.”

In an open frame, a bowler simply gets credit for the number of pins knocked down. In the case of a spare, a slash mark is recorded in a small square in the upper right-hand corner of that frame on the score sheet, and no score is entered until the first ball of the next frame is rolled.

If a bowler gets a strike, it is recorded with an X in the small square, the score being 10 plus the total number of pins knocked down in the next two rolls. Thus, the bowler who rolls three strikes in a row in the first three frames gets credit for 30 points in the first frame.

Bowling’s perfect score, a 300 game, represents 12 strikes in a row–a total of 120 pins knocked down. Why 12 strikes, instead of 10? Because, if a bowler gets a strike in the last frame, the score for that frame can’t be recorded before rolling twice more. Similarly, if a bowler rolls a spare in the last frame, one more roll is required before the final score can be tallied.

With practice, you’ll be curving the bawling ball in to the pocket, converting the 7-10 split and even go for the perfect bowling game!

You won’t be able to resist bowling another ten frames of the world’s favourite family sport.

Notes: The permissions required in this game is only used for online leader board.
– Intuitive tap and swipe control
– Easy and simple to play bowling game for free
– Control the bowling ball with your mobile device (gyrometer)
– Play in fantastic bowling clubs all around the world